***Quick Note - Review: Tell all is open below to discuss all things "Sister Wives" and the post is open to discuss the new shows, thank you.
**This summary contains spoilers** 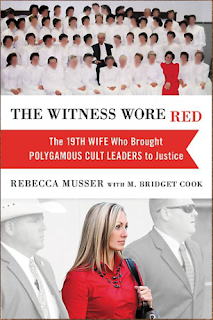 Rebecca Musser was born into the FLDS, first led by Rulon Jeffs and then ultimately run by Warren Jeffs. Rebecca was born to a second wife. Rebecca was taught at a very early age that life was full of sacrifices. This line from the book sums it all up “We had to endure life, we had to suffer pain and sacrifice; eternity was all that mattered”. In fact, they were taught that if you knew ‘the truth’ of the religion (FLDS) and then left, you were an apostate, destined to burn in eternal darkness. Starting at the very youngest age, she was taught that outsiders (“Gentiles”) were evil and never to be trusted. Gentile doctors were not to be trusted, nor were the police or government. They were taught that Gentiles wanted to take children from their parents and throw their fathers in jail. They were frequently reminded of the Short Creek raid where families were separated, sometimes never to see each other again.


Rebecca’s childhood was heartbreaking. Her father’s first wife, Irene, was cruel and mean to both Rebecca’s mom and Rebecca’s mom’s children. Frequent beatings took place, sometimes to the point of blood and broken bones. Rebecca’s father deferred to Irene and looked the other way when Rebecca’s siblings or her mom were abused. Rebecca attended the Alta Academy, founded by Rulon Jeffs. The principal of the school was Warren Jeffs. Rebecca found that she had skills at playing the violin and playing that music was a refuge to her from her disturbing home life. At the Alta Academy, the children were frequently lectured by Warren Jeffs to obey and keep sweet, never be displeasing. Warren taught them that polygamists were persecuted just as the Jews were by the Nazis. Rebecca assisted with the school and helped put musicals together.


Shortly after she turned 18, Rebecca was told she would be marrying the prophet, Rulon Jeffs. She would be the 19th wife of the 85 year old prophet. Rebecca was devastated. After her wedding, she learned that being Rulon’s wife meant she had to be ‘on duty’ for 24 hour shifts, helping him to use the bathroom and undress. Unfortunately, despite his relative frailty, Rulon still expected his wives to ‘satisfy’ him and perform sexual acts with him. Due to his age and inability to sexually function adequately (although they had to try) most of the newer wives did not get pregnant with Rulon’s children. Less than a week after their marriage, Rulon announced that he was marrying two more young wives. Despite not loving her husband or being attracted to him, Rebecca was nonetheless devastated that her new husband didn’t find her to be ‘enough’ and this led to jealousy and feelings of inadequacy. There were 46 wives after Rebecca for Rulon Jeffs. Being married to a prophet was considered to be an honor for a girl and her family so to complain would be displeasing and blasphemous.


Rebecca was now fully immersed in being part of the Jeffs’s family. Warren was Rulon’s right hand man and was involved in the daily life of Rulon and all of his wives. When Rulon asked Rebecca to be ‘on duty’ a little sooner than she felt was reasonable, she said “no”. Warren then called her into his office where he told her that she could never again tell her husband ‘no’. If she were to say no again, she would be destroyed in the flesh. Rebecca did the best she could to stay busy with activities that would be acceptable to Rulon, thus not having to be on duty as often. Rebecca threw herself into the teaching and music that she enjoyed.


A few years after they married, Rulon had a stroke. Rulon had claimed to his followers that he was going to live forever, he was their last prophet and would be there personally when Christ came back to Earth. He simply could not die, that would be a devastating blow to all the people of their faith. Therefore, the people were kept in the dark about the true extent of Rulon’s health. The wives were even more restricted to their activities as they had to be on site, fasting and praying. When Rulon had a rough night, Warren would tell the wives that they had not been faithful enough or praying enough. Warren started determining who could see Rulon and stopped allowing Rulon’s close contacts to see him anymore. Rulon hung in for quite a long time in his feeble condition but Warren started running most of the day to day operations of the FLDS. When the world didn’t end on December 31, 1999 as they were told would happen, Warren said it was because the followers were too wicked to be brought up and God was giving them more time. This become a constant event, doomsday dates were picked and then when they didn’t happen, Warren would say they were too wicked and it was their fault.


As Rulon continued deteriorating, Warren went on a marriage spree, performing hundreds of marriages and the girls were getting younger and younger. Warren told girls who were 12 that since Mary, mother of Jesus, got pregnant at the age of 12, then it should be considered an honor to get married young and start birthing children. Rebellious girls (those who questioned some of the principles or who didn’t keep sweet), were married off so they could be ‘broken’ and start having children. Young girls with children were more likely to stay within the FLDS because they had nowhere else to go.


Rebecca’s sister, Elissa Wall, was told she had to marry her first cousin. She was only 13. She begged and pleaded to be given a few more years to marry. Rebecca was successful at getting Elissa a little more time but eventually Rulon agreed to let Elissa’s father place her in marriage. This led to years of physical and sexual abuse of Elissa. When she complained, she was told to go home and submit to her priesthood head (her husband). (note: Elissa Wall has written a book about her experiences “Stolen Innocence”)


Eventually Rulon died and his followers were in shock. They were told he would be the last prophet. Thousands of followers came to his funeral. They believed, like Jesus, that Rulon would arise from the dead. When he didn’t, it the wives were at fault for being too wicked. When Rulon died, Warren stepped in and said that Rulon has given him the title of Prophet. Warren then set strict rules in place, no music, no toys, no laughter and and no one could wear the color red, it signified evil. After initially promising that he would not force Rulon’s wives to marry him, Rulon’s younger wives started having ‘revelations’ that God wanted them to marry Warren. Rebecca started worrying that she would become another one of Warren’s many wives. Rebecca started a friendship with a young man named Ben. She eventually was caught kissing him and Warren gave her an ultimatum, she had to choose a suitable husband (i.e. Warren) or she would be damned for all eternity. Rebecca decided enough was enough and with Ben’s help, she left the community.


Life outside the FLDS was difficult. Having been told about how evil the Gentiles were , Rebecca was happy to find that others were willing to help her. She and Ben moved to Oregon where Rebecca’s brother, Cole, lived. They worked in various wait staff jobs and did their best to get their lives together. Rebecca eventually become pregnant and Cole kicked them out of his house for being dishonest about their relationship. Eventually, Ben and Rebecca married and had another child, Natalie, who had some congenital abnormalities. Much of Rebecca’s story, however, depicts how her life was impacted by the FLDS even after she left and her endless determination to see that Warren Jeffs paid for the pain and suffering he caused.


Although Rebecca left the FLDS, she was very aware of what was happening within the community. There were stories of her sisters being married off and boys being dropped off at the side of the road. Rebecca said she they aren’t really ‘lost’ boys, they are ‘abandoned’ boys. Soon Warren’s bad behavior caught up with him and he was being accused of many offenses by various states including Utah, Arizona and Texas. Warren then went on the run. His followers became even more devout as they now considered him a martyr. Rebecca contacted law enforcement in order to check on some of her family members that had gone missing. After a lot of investigation and communications with her contacts in the police department, some of her relatives were found in Texas at the “Yearning for Zion” ranch. The YFZ ranch was in Eldorado, Texas and ultimately became the beginning of the end for Warren. There was a phone call from “Sarah Jessop” to the State of Texas claiming she was being abused and pregnant. This was enough for the State to go into the YFZ and search for the victim. The State eventually had to enter the temple to search for Sarah. Although Sarah was never found, there was disturbing evidence about the abuses of the FLDS and specifically Warren Jeffs.


Warren was eventually located and arrested. He was captured in, of all things, a Red Escalade. Law enforcement needed someone who knew the FLDS, knew the terminology and the people and someone who could decipher all the records that were found in the YFZ temple. For the trial, the State needed to get the truth about the FLDS and most specifically about Warren Jeffs, who had harmed so many families.


Rebecca stepped up to the challenge. She sacrificed time with her family and her jobs in order to see that Warren paid for his gross transgressions. There were several months of trials in several states. Rebecca was called to testify in many of the cases. The most significant case was the YFZ case in Texas and Rebecca was key in helping the legal system and jurors understand exactly what was happening within the FLDS. When Rebecca testified against Warren, she wore red. The color that was forbidden by the false prophet was now her signature color and personal statement. Warren was found guilty and is in jail for the remainder of his life. Rebecca remains an advocate for people seeking to leave the FLDS and remains a voice for the previously voiceless.


This book was excellent and I highly recommend that it be a part of everyone’s library, especially anyone interested in polygamy or human trafficking. Rebecca’s story is important and should be read and discussed. *Written by CPA Carol*

Have you read a good book you'd like to write about? If so, send us an email!
I'd like to see "Prophet's Prey" by Sam Brower, "Church of Lies" by Flora Jessop, "It's not about the Sex, my ass" any listed on the right of the blog, or any others! I know we have one coming in on "Plygs", so that's taken care of.  Thanks!
Posted by Mister Sister at 8:38 AM

You may post under comments using the following log ins: LiveJournal, WordPress, AIM, OpenID, Typepad, Name/URL, Anonymous. If you have a gmail (google) address, you may sign in with that at the top and use it. PLEASE FOLLOW US by adding to our follower list below. Or use the Name/URL- no need for an URL, choose a name and type it in, or Anonymous.
THANKS! WE APPRECIATE YOU!